The Group Mission of the IMAGICA GROUP is to strive to create new value with honesty and sincerity, and aim to be a visual communications group that provides the world with surprise and excitement. We recognize that corporate governance is one of the important tasks of group management to achieve this, and implement various measures to improve management transparency, ensure compliance, and pursue swift decision-making.
In order to implement these views on corporate governance properly, we have established the Basic Policy on Establishing a System of Internal Controls, which sets forth our basic views on internal controls and our policy on implementing them.
We also established the Corporate Governance Guidelines on September 1, 2019. These guidelines express the basic position of the IMAGICA GROUP on corporate management and corporate governance. 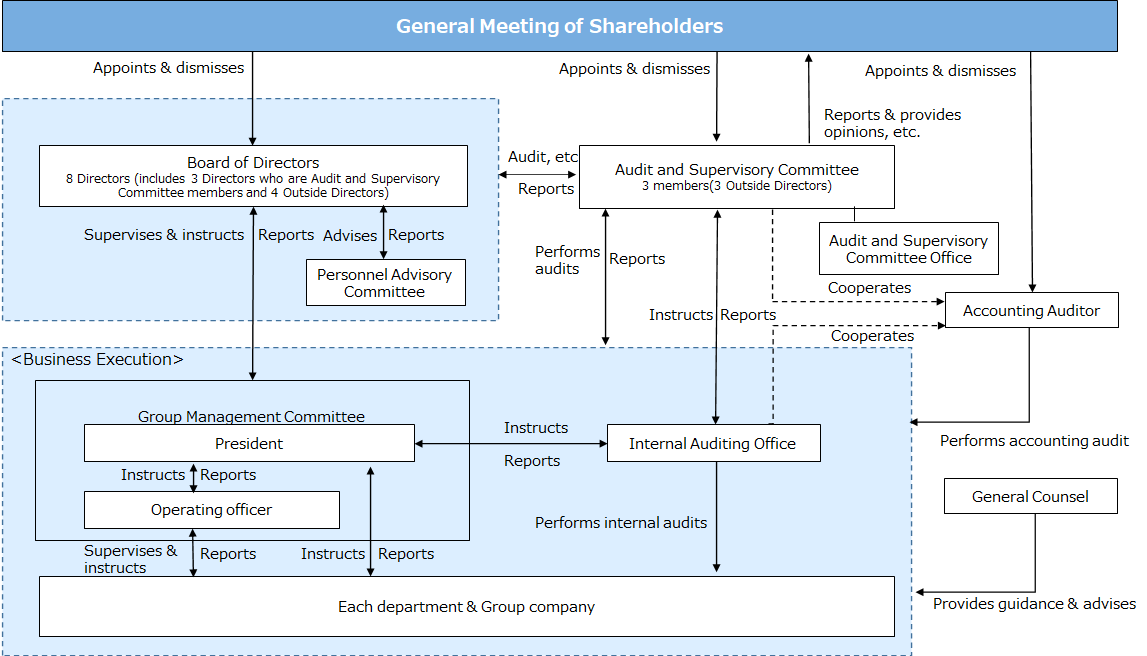 The Board of Directors consists of eight directors who make decisions regarding management and supervise the performance of duties. They are Fumio Nagase, chairman & representative director; Nobuo Fuse, president and representative director; Masakazu Morita and Toshiaki Okuno, directors; Atsuko Murakami, outside director; Jun Ando, director and audit & supervisory committee member; and Juro Nakauchi and Osamu Chiba, outside directors and audit & supervisory committee members.

The Personnel Advisory Committee examines and deliberates on policies concerning the appointment and dismissal of directors (including outside directors), individual director compensation, and overall compensation of directors and executive officers, and reports to the Board of Directors. The Personnel Advisory Committee has four committee members: Fumio Nagase, the chairman and representative director and committee chair; Atsuko Murakami, an outside director; and Juro Nakauchi and Osamu Chiba, who are both outside audit & supervisory committee members.

We have established the following structure and elements based on the views noted above:

The company’s Board of Directors establishes rules on corporate ethics and other rules concerning the compliance system as standards to ensure the compliance of directors and employees with laws and regulations and social norms. The General Affairs Department oversees compliance initiatives across the company to ensure strict compliance, plays the main role in training and education, and has also established a whistleblowing and consultation hotline as a means of providing information directly to employees about actions and events they have questions about in regard to compliance.
The Company is resolutely opposed to antisocial forces that threaten social order and sound conduct of the company and takes systematic steps to oppose them.

nformation concerning the performance of duties by directors is recorded in writing or on electronic media (hereafter, “documentation”) and retained. Directors may view such documentation at any time.

3) Rules on Loss Risk Management and Other Systems

We have established internal rules on risk management to address various risks inherent to business activities, and have built a risk management structure that is overseen by the General Affairs Division. When a serious event occurs, a crisis response headquarters is established with the president and representative director as the head, and rapid action is taken to prevent even greater damage.

4) System to Ensure that Directors Perform their Duties Efficiently

The Board of Directors specifies shared company-wide goals for directors and employees, and uses the following management and operating systems to increase the efficiency of directors in performing their duties.

5. System to Ensure Proper Operation of the Corporate Group Consisting of IMAGICA and its Group Companies

As a holding company, IMAGICA GROUP allocates the necessary management resources from the perspective of what is optimal for the company as a whole. We also ensure appropriate operation of group companies as described below while respecting the autonomy of each company, in accordance with the Rules on Group Management.

9. System to Ensure Efficient Audits by the Audit & Supervisory Committee

Please note that the company plans to raise the percentages indicated by *1 and *2 to 33% and 33%, respectively in 2020.
The results of the calculations performed according to the criteria noted above are discussed by Personnel Advisory Committee, which consists of the chairman & representative director and three outside directors. The committee then reports its recommendations to the Board of Directors and receives approval.